What is Auricular Acupuncture? How does it work?

Acupuncture derives from the Latin word “acus” for “needle” and “pungere” for “puncture”. Although Traditional Chinese body acupuncture has a long history dating back more than 3000 years, the acupuncture points around the ears belong to the major body Acupuncture channels or meridians.

Modern auricular therapy is not, by its very definition, either traditional or Chinese. The use of the ear as Microsystem for the treatment of Bodily disharmony only became a Primary treatment methodology in the 1950s after the discoveries of Dr. Paul Nogier in Lyon, France. Through decades of investigation, Paul Nogier was able to map the reflex points on the auricle which resembles an inverted foetus. 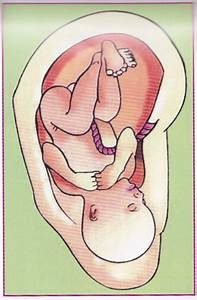 To understand Auricular Acupuncture you have to imagine that the ears are like a switchboard connected to the brain. There are over 200 acupuncture points located on the ear. Auricular Acupuncture is a physical reflex therapy that is able to detect physical (somatic), physiological and psycho-emotional disturbances in the body which are then projected onto the external auricle. The treatment of ear points will then stimulate the brain which in turn will alleviate physical, physiological or psycho-emotional problems in the body. The rich network of nerve innervations allows energetic organ information to be conveyed through the nervous system between the corresponding parts of the brain and the specific anatomical area of the body. It cannot harm healthy parts of the body.

The ear seeds (also known asVaccaria seeds) are non evasive pressure seeds. These seeds are held in place on the ear with a small piece of adhesive tape.

WHAT TYPE OF NEEDLES DO YOU USE?

I mainly use Sterile, single use stainless, disposable needles. For Battlefield Acupuncture ASP Needles are used. Each patient receives his/her own disposable needles and at the end of the treatment, these needles discarded into a medical hazard container after a single use.

WHAT CAN I EXPECT DURING A CONSULTATION?

During consultation, the practitioner aims to determine the nature of the disharmony in the patient by careful history taking and observation. A detailed understanding is required of the patient’s symptoms, medical and family history and behaviour of all the body systems (for example: digestion, circulation, life style, sleep patterns and diet). Usually the Acupuncture Practitioner develops and design a treatment plan after consultation and diagnosis.

Treatment time should be used to sit quietly, relax and reflect, or meditate. Do not smoke or drink coffee in the half-hour before and after treatment. Let the acupuncturist know if you have any (new?) health problems. Your initial visit will last for up to 90 minutes and subsequent visits for 30-60 minutes. The treatment triggers the release of natural body chemicals, including endorphin (en dor fin), which help reduce symptoms and increase relaxation. Generally, you will visit weekly to begin with and, as you improve, this will become less frequent.

During treatment needles are inserted and left in place for 30 minutes. A fresh set of pre sterilised needles is used for each patient so that treatment is completely hygienic. Usually patients feel at peace and relaxed during and after treatment.

Acupuncture treatment may produce rapid results but, often, may take longer, depending on whether the condition is chronic or acute. Usually, 1 session of acupuncture treatment per week covering a period from 3 to 10 weeks are recommended. In case of relapse or the occurrence of stress in your life, additional treatments may be required.

WHERE DO YOU PUT THE NEEDLES?

The needles are inserted in certain acupuncture points on the skin of the Ear. The location of the needles depends on anatomical surface of the human body as well as the pattern of symptoms in various diseases.

WHAT ARE THE REACTIONS TO ACUPUNCTURE TREATMENT?

The main reactions to acupuncture treatment are:

Most clients start to feel relaxed five minutes after the needles have been inserted. Before the needles have been removed they could also feel calmer. They should feel less irritable and be able to think more clearly. Sleep patterns usually improve. In the case of treating musculo-skeletal conditions, some 25% of clients will experience more pain for a short time, up to 24 hours after treatment, before feeling better (this usually occurs on the first treatment). We usually call this a ‘healing crisis’.

The Client is advised to drink a glass of water, fruit juice or green tea after each treatment as it can have a strong detox action.

Some fear acupuncture, thinking it will hurt. But the needles are so fine that their insertion is often not even felt. However, some people have more skin sensitivity than others and some points are more sensitive to treat than others. Most people, however, say the treatments are not at all painful.

DO I NEED TO BELIEVE IN ACUPUNCTURE IN ORDER TO BE EFFECTIVE?

Significant scientific research indicated when acupuncture is used for young children and animals (backache in racing horses and arthritis in dogs and cats), both groups being less likely to be affected by the degree of their beliefs. These studies suggested that acupuncture produces a significant physiological response regardless auto-suggestion in acupuncture benefits. However, acupuncture can be effective if the patient is maintaining a positive attitude with a firm belief in the treatment. Even the western medicine practices is recognising the importance of the patient’s attitude towards treatment.

HOW LONG DOES A SESSION OF ACUPUNCTURE TREATMENT LAST?

DO I NEED A REFERRAL FROM MY GP?

You do not need a referral from your GP.

How often do I need to apply colour?

How long do I need to keep colour daily?

You need to keep colour for 4 to 6 hours daily. Colour works better in light, so preferbly apply during day time.
GET IN TOUCH